‘They’ (old Yorkshire ee-by-gum-types probably) say it takes an outsider to know what’s not shit about a place. We don’t agree, but it’s always nice to hear someone praise Birmingham.

Wilbur – from Birmingham Alabama – ended up in Brum thinking it was Paris, easy mistake to make.. for an American, but he loves it so much he’s hooked up with the city council to promote all the leesure and culture stuff that we’re supposedly missing out on. Come on admit it, it’s been ages since you went to see Ford Maddox Brown’s The Last of England.

He was particularly impressed by the free interweb access in the Central Library and …. oh alright we’ll come clean… it’s an advertising campaign and Wilbur is really an actor, called Rob. 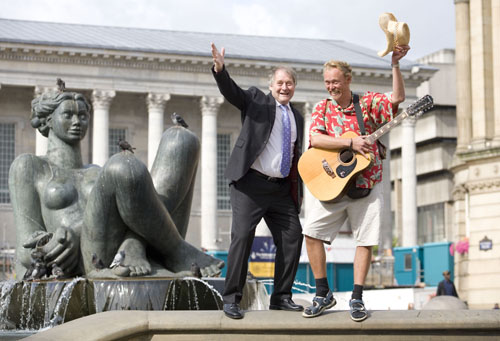 >We wouldn’t normally be interested – I mean the campaign is no ‘Visit Traditional Erdington‘ , but the pictures are fantastic – even if I can’t stop thinking that Wilbur looks just a touch Australian – AND there’s a song that’s goes with it.

It’s a touch county and western (no, not some c– from Weston) and it features Babu, our favourtite Brummie of the Year.