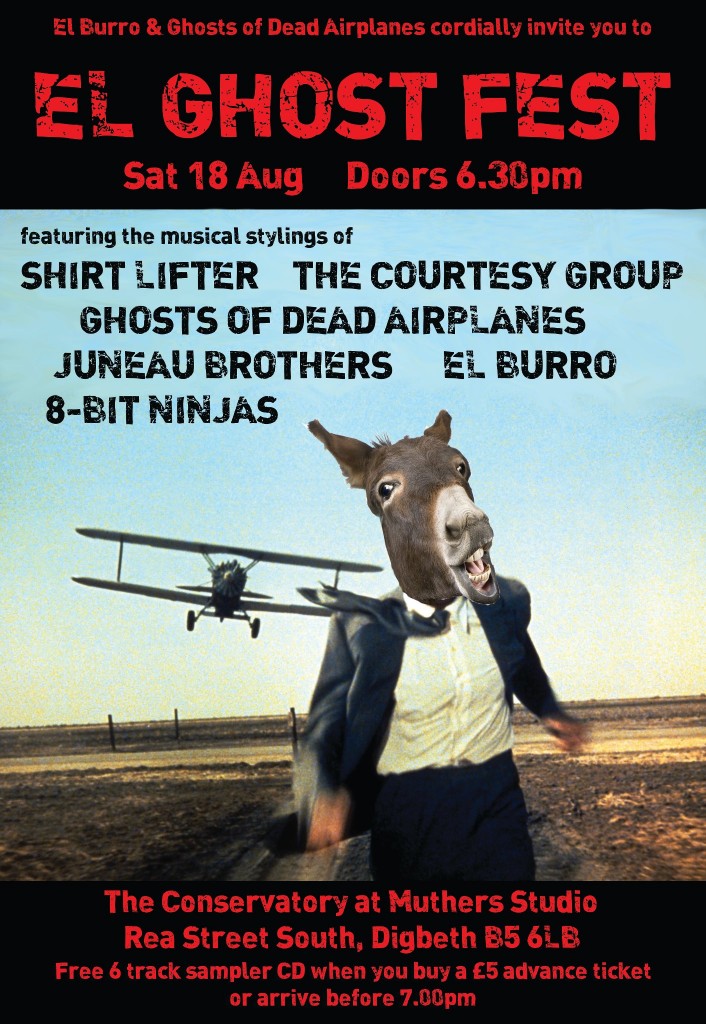 *Buy an advance ticket (available from the bands/venue/PayPal: julia.gilbert[at]gmail.com) or arrive before 7pm to receive a free sampler CD featuring a track from each band!

The Fattest Band in Britain

In 1998, inveterate scribbler & performer of ‘stuff’, Al Hutchins, had amassed an unreasonable number of Aldi carrier bags, wherein such stuff and gear did reside. Thinking these bags should get out more, he left the great indoors to form the rhythm, holler and tune-mongering thing that is The Courtesy Group.

Already on board was Fyfe Dangerfield (GUILLEMOTS) who would turn up to gigs to play guitar, keyboard, and bang or hit any random object to produce a sound.

Several years of transiting Blighty for gigs; ardent and diverse supporters of the group emerge, such as John Peel, John Cooper Clarke and Damo Suzuki.

An album, “Vouchers”, is recorded then jettisoned in Gloucester in 2002/3 amid Spectoresque engineer antics. With a stripped-down 4-piece lineup including DELTA drumbo Bird, the band come back from dates in Hungary and begin writing a fresh LP, taking only one track from the previous one with them. The resulting album has survived studio closure, complete engineer AWOL, mastering and remastering, the birth of children, essential skintdom, the 11 outer circle bus route, and CD manufacturer bankruptcy.

Fractured psyches, shattered cymbals, feline tendencies, ornithologist astronomers, hearts on sleeves and feet in mouth. Documentation is key, but don’t dissect or over analyze, as impertinent spontaneity creates more favourable results. A whisper as a scream, a sigh as an exclamation. We play songs at volume and pace. Some of us like coffee, some of us like cigarettes. The twain may well meet.

Formed in February 2012 Ghosts of Dead Airplanes are a four-piece alt/experimental, anything-goes-in-the-pursuit-of-a-good-tune-beat-combination group.

Having shared the stage with up-and-coming luminaries BLEECH, and ARROWS OF LOVE in Birmingham, as well as jaunting to Glasgow to play at renowned underground club night Hotwire (where Manda Rin of BIS was DJing), it’s been a productive first five months. Recording sessions for a debut release are booked, and an EP is in the pipeline for the Autumn/Winter of 2012.

Drawing on influences from no wave to the lackadaisical early to mid-nineties slacker scene (think Sonic Youth, Pavement etc.), to the post-punk of PIL, with a shot of Gothic vocalization and Jonny Greenwood-esque guitar pyrotechnics, there is musical magpie-ism at play, creating a unique cacophony of aural delight.

Songs from the future by a band from the nineties.

Grown in a lab somewhere near Ladywood, Juneau Brothers are clones on a mission to download the binary buzzing in their perspex-laced skulls.

Two boys in a Birmingham-based band, usually bearded, play fast and glitchy synthpop. Founded on a love of video games and strong women. Sound a bit like Syd Barrett trapped in an Atari, or a summer’s morning ruined by overzealous birds.

8-Bit Ninjas are a chipclash band from the West Midlands in the UK. They combine 8-bit and chip sounds with crunchy guitars to write bouncy pop music.

8-Bit Ninjas happened by accident. The result of Andy Cowley, up until this point a rock, indie and folk drummer, happening across Alice In Videoland’s ‘Outrageous!’ on his Creative Zen. Where this album came from, no-one is sure, but sparked an interest deep inside his twisted mind. Through AiV, he happened across Thermostatic and from then into the wonderful world of chiptunes. Once he’d got his ears around a few more such artists, the vision was clear in his mind… He must contribute to the this new world of recycled electronica.

Armed with years of teeth-cutting on rock, indie and other alternative guitar-based music, and a fair bit of experience with home recording, electronics and vintage consoles and computers, weird and wonderful experiments were performed in his flat and the result was 8-Bit Ninjas.

← Billy and the magic mushroom
Slade, Live 1971 →
BiNS was mostly by Jon Bounds.