On Thursday, if you have a vote, there are local elections in Birmingham and also a referendum. You’ll get a ballot slip asking if you would like a change to how the council is run, if you’d like the opportunity to vote every four years for a directly elected mayor. I’ve been very convinced that we do need one and so please excuse this rare political message.

Although we agree Birmingham is not shit, I think you’ll agree that it could be a lot better in some areas and that the current council system is either not trying or not working on them. We’re lacking jobs, there’s money wasted on huge vanity projects like the new library, the promotion to the rest of the country and the World is still poor. Independent research says that elected mayors can help with stuff like that and don’t cost any additional money. The no campaigners seem to have few coherent arguments and only scare stories. Go check them out, and remember that it only seems to be politicians that are doing okay out of the current system that are saying ‘no’.

I marked the Brum reasons to vote no to mayor leaflet out of 10. It gets 1 and that’s 2 halfs. Just wrong so many times

So I ask you to consider a vote for an elected major, please. It’s Brum’s chance to have a strong voice to talk to central government and the rest of the World.

We need a mayor, like New York has, like London (although a better one), someone to stick up for us. Vote yes. Vote Brum.

Here’s some good reasons why:

Mayor of New York Mayor Bloomberg tells you why voting ‘yes’ in the referendum is a “total no-brainer”.

“Someone needs to set out a compelling vision for this city. That vision has to be tested, informed and ultimately endorsed by the electorate. This person then has to use this mandate to go out and deliver the vision they’ve promised. For me, there’s no choice – this person has to be an elected mayor.”

Do some people oppose #BrumMayor because they do quite well out of the current party political carve up? Do you think?

And here’s why I’m voting yes.

Even the biggest dog in the World thinks it’s a good idea.

See the Yes to a Mayor Website for more reasons.

But mostly put your cross in the box like this: 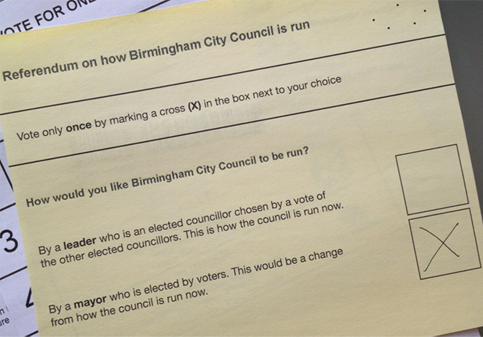 13 comments for “BiNS says: Yes to an Elected Mayor for Birmingham”