It was a shocking moment when after nineteen years of living in Birmingham I realised it will never be finished. The building work will never be done, some part will always be being demolished for another part to be built fresh: no one will ever take a step back, with their hands on their hips, and turn around with a ‘TA-DAA’. The ubiquitous cranes will always be part of the skyline, they’re not visitors they’re residents.

Cities are the bodies of our collective souls, and like bodies they change, regenerate, and can be easily marred. Ever see Ground Zero from up high? It looks like a fuck-awful scar across the face of pretty girl.

The Queens Drive staircase is an access staircase that travels from the bottom of Station Street up to the passageway that connects the Pallasades to the Bull Ring, with an exit to New Street station halfway up. And it’s to be closed soon.

This staircase is one of my favourite little short cuts from New St. You have to duck up the tramp ramp (named ages ago because of the amount of beggers that used to line it, they’ve all been moved on now but the name stuck). It’s sad that the homeless are considered a nuisance and unsightly when chuggers still get to ply their loathsome trade, especially considering most of New Street has become an obstacle course of eye contact and cheery student types waving their golf brollies at you. Also nothing will weary you of giving to charity than this recent phenomenon, by the sixth or seventh ‘can you spare a minute for abused pandas?’ you’re ready to knee them in the bollocks and never give to charity again. 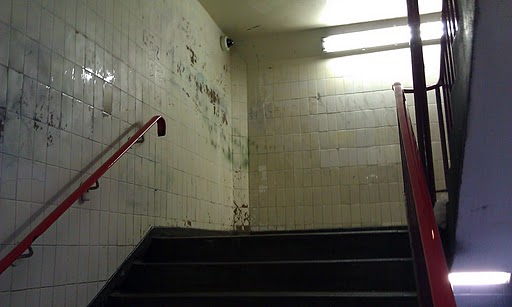 I’ve never seen pavement markings that guide the direction of foot traffic like the ones found on the tramp ramp before and as much as the rebel in my head wants to shout and kick, they make sense and actually work, turning a clusterfuck of people milling and bumping into a smooth flow of pedestrians.

Now you have two choices, I always head towards the New Street Station escalators: this allows me to use the mirrors that face you as you descend to people watch. You can, for example, tell the people that have just come from London—they’re the ones that automatically stand to the right to allow people in a hurry to pass them, not yet realising that saving that extra ten seconds on a escalator trip is something only an idiot Londoner would do and everyone else in the country doesn’t really give two shits or a fuck.

Now if you head out the doors on the left and bear left, you come to the staircase. I used to head towards it because I loved the sculptures that adorned the windows of the Electric Cinema. Called ‘Thatchers Children’, they showed various mannequins in an assortment of grotesque and tortuous poses, set in black windows and highlighted by the red tile of the building. As much as I love the Electric Cinema and wish it all the support a man can give, especially in the chain-dominated city we live in, there will always be a part of me that will never forgive them for painting the whole thing unassuming coffee house beige.

The stairwell itself is grubby, and stays that way even after several coats of paint. It’s grubby because of its ghosts. It has been used as a heroin shooting gallery, its architecture and lack of lighting and, until recently, cameras has made it a prime spot for god knows. Most obviously it’s a pissoir, ammonia hangs heavy in the air, and the latest coat of paint was only painted over the old stuff so new graffiti joins the shadows of graffiti past. 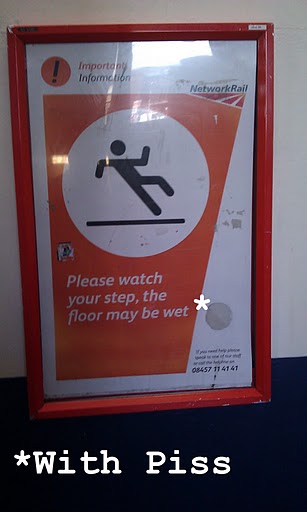 But to me it’s a short cut, a cheat code to the city. Gateway of my youth from the mainstream of New Street to the best shop in the world Nostalgia & Comics, awesome to my young eyes in the traditional sense as its huge indoor posters and connection to a world of other people into the same things as me would leave me slackjawwed awestruck. Now as an adult I still visit Nostalgia & Comics as well as spend time in the Vic.

Years ago there used to be an escalator that travelled from Station Street straight up to the Pallasades, it was just a little further than the staircase and connected what used to be the Midland Red bus station to the shopping area at the top. I still associate that escalator with the worst migraine I ever had bought on by some coconut ice cream bought in the Bull Ring, the migraine hitting me like a speeding stag as I made my way to the bus station with my nan. I still can’t stand the smell of coconut.

I’ll miss the stairs, but by writing this I hope I’ll never forget them. Like a scar made smooth by a plastic surgeon I’ll still see it even if my others do not.