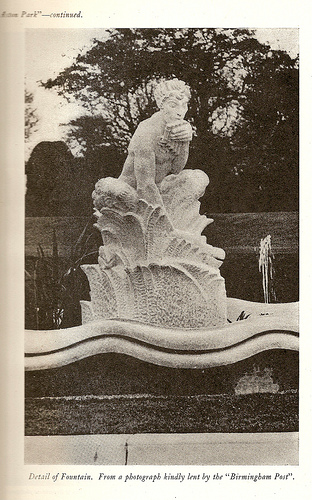 “Curators from Birmingham Museum and Art Gallery have secured funding to restore sculptor William Bloye’s 1934 statue of the Greek God Pan, which formerly had pride of place the West garden at Aston Hall.

Just one problem – the statue’s head was stolen by vandals six years ago.

Aston Hall & Park reopened to the public in July 2009 following a £12.75m refurbishment and restoration project. The refurbishment of the West Garden was not included in the original scheme but thanks to ongoing fundraising efforts a package of restoration and landscaping work to the garden costing some £70,000 will be carried out this year.

Artists from specialist sculpture company Eura Conservation have completed an initial clay maquette (small scale model) of the missing head which will ultimately be carved in Portland stone and reunited with the rest of the figure.

Unfortunately, there are no detailed images of the statue prior to the vandalism and sculptors need help to recreate an accurate copy of the missing head.

That’s where Birmingham residents can help. Curators are urging members of the public to send in photographs of Bloye’s statue to assist the restoration project.”