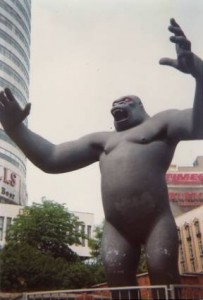 A local, erm, enthusiast is campaigning for the King King statue late of the Bull Ring Markets (and some car place, and Dudley Zoo apparently) to be returned to tower over Brum. That’s despite him saying: “apparently poor old King Kong has recently been melted down by his Scottish owners” — or is he in Penrith?

An enduring image, isn’t it.

53 comments for “King of Kong”