In a display of seasonal awareness to match how Bill Oddie thinks it’s time to watch spring in May, Birmingham City Centre is getting a Summer Fête at the end of August. The Edge in Digbeth will be the venue for Punch & Judy, Splat The Rat, a Tug O’ War, Teddy Bear Bungee, Guess The Weight Of The Cake, and all of the stuff you would expect at a traditional British summer fête — plus music and comedy from some exciting acts.

It’s the launch event for new Brum-based magazine Dirty Bristow*. The magazine doesn’t carry adverts, in order to give full freedom to the writers and illustrators — and so each issue will hold fundraising events to offset the cost of production. Issue one is packed with literary musings, essays, fiction and art on the theme of ‘birth’, and the only way to guarantee a copy is to come to the fête. 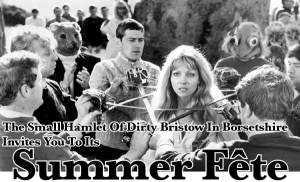 The mayor and vicar of the small fictional hamlet of Dirty Bristow have collected a huge variety of traditional musics, comedy, stalls and games — and have arranged for them to happen:

So far confirmed is live music from 8-Bit Ninjas and Glatze and comedy from Tom Lennon and Harry Vale, more acts and attractions are to be announced.

Tickets are now on sale.

*full disclosure, I’m one of the editors and will be acting as the Mayor of Dirty Bristow for the evening.

← "tracing the strands of human connection that persist amid the concrete underpasses and flickering…"
Journey times to Birmingham New Street throughout the day by… →
BiNS was mostly by Jon Bounds.