I’ve read a couple of brilliant Brum-related books recently, and I thought I’d suggest that you should enjoy them too… 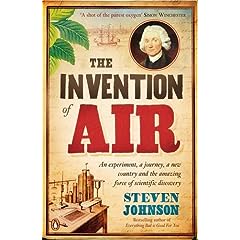 The Invention of Air by Steven Johnson is a great book about Joseph Priestley — inventor of carbonated water (and hence fizzy pop), discoverer of oxygen and the first man in Birmingham to have what I fancy as a job (local luminaries paid him to muck about — erm, experiment — in return for hearing the results). His time in Birmingham — yes another Lunar Society member — was quite short, and ended in his house being burnt to the ground by religious zealots, but it was a time that epitomised the open collaboration between peers and the ground-breaking ideas that he had been striving for where ever he lived. The book is to a certain extent focused on his influence on the American founding fathers, Franklin and Adams, but it’s a read that doesn’t shy away from making parallels with the modern day — would that our scientists and engineers were equally at home talking politics and religion. If it whets an appetite for lunaticks try Lunar Men: The Friends Who Made the Future

by Jenny Uglow which while a little more heavy going is a top read.

This is Birmingham: A Glimpse of the City’s Secret Treasures

is a brand new book full of angularly stylised images of Brum by Jan Bowman. It tells the story of Birmingham, from one house and a goat to Selfridges and canal-side living. It’s aimed at ages six and up — and yes it would make a fascinating introduction for young children to the story of the city, but there’s depth here. It touches on Paine and the Rights of Man, Wedgewood’s anti-slavery broach things (and the hash commercial realities that it was the industrial revolution that helped to end slavery) — it’s a book that makes history beautiful. It makes Smallbrook Queensway beautiful too and that’s got to be worth showing everyone.

If that’s not enough Brum bookage for you, why not learn a little of the history of social housing – though the prism of Chelmsley Wood and  Lynsey Hanley’s Estates: An Intimate History

. It’s part memoir, part politics — but as a real view of the ‘Wood it’s fantastic. Or you could get Chinny’s genuinely brilliant Proper Brummie: A Dictionary of Birmingham Words and Phrases

— which should excite anyone who enjoys saying “outdoor” to confuse posh in-laws.

Or Dogs in Birmingham

Yep, there are Amazon affiliate links in there, you wouldn’t begrudge us a cut would you?

1 comment for “Books are easy to wrap up as Christmas presents, you know”