The Eccentric City thanks the Summer Edition 2009, Dublin, Ireland for a wonderful event and visit.

Last weekend (July 4th 2009), myself and co-founder/publisher of The Eccentric City, visited The Summer Edition 2009: An Artist’s book, Comic and Zine Fair in Dublin, Ireland. We had no idea how large and how diverse this fair was going to be. Having had a brief correspondence with the organisers, it was clear that they were arranging an important event and one that we identified with. Importantly, Summer Edition 2009 was an opportunity to raise the profile of many independent artists working in Ireland and not just within Dublin itself. Many zine publishers alongside a large collection of comic makers attended and shared their work at Filmbase, Temple Bar. It was the first art and zine premier event to occur in Dublin. Small and discrete magazines as well as art catalogues and art/zine books, poets to printmakers and lowbrow artists – made for a highly stimulating environment, one that was occurring at grassroots and from the simple passion of DIY and beyond… Obviously, we took The Eccentric City newspaper and handed out many free emotional papers to strangers as well as giving a reading… 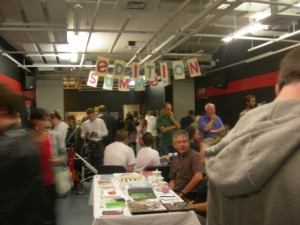 Many travel from across Ireland to partake in Summer Edition 2009 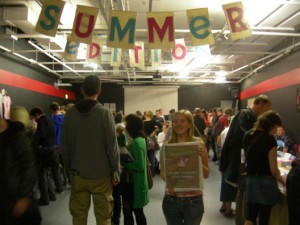 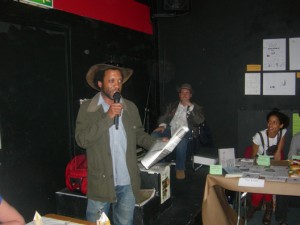 Simon reads from The eccentric city 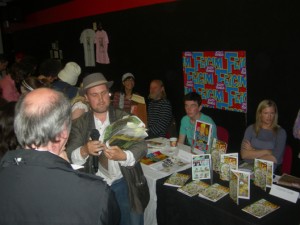 Harry reads from The Eccentric City

Having spoken to the organisers who themselves were independent makers and publishers of comics, zines and beautiful crafted artbooks – they used their existing network of friends and allies to get the message out, bringing people from across Ireland, to share their work for the general public to see, buy and discuss (and in some cases, swap). It became apparent that the necessity to DIY underpinned what was going on, not forsaking the intelligent and delightful qualities of self inspired and self committed art making. Indeed, the event offered a refreshing eccentric deviation into the unknown, with each stall holder and table littered with handmade or ‘professionally’ looking and highly conceived creations – unique to each individual and inspired maker. Above all, the politics of stories narrated in text bound hardcopy publications made for its own cult economy, removed from commercial or cultural industrial exploitation. Quite sensationally, nowhere did we see a logo, nor the influence of mediated arts administrations or commercial spin.

Needless to say, uncontrived, authentic and intelligent art works are ongoing in Ireland, which have all the hallmarks of stemming-off the cultural recession/regression we find ourselves within the so called age of new media and cultural institutional know-how. Indeed, having been amongst a plethora of cultural events, Summer Edition 2009 was a refreshing and exciting unmediated arts and cultural event. When I asked how they had been financed, they simply said that they got on with it themselves, and that many of the artists in the city and beyond had irrespectively responded once more to the lack of financial support that never comes…. Unremittingly, those who are impassioned regularly outclass the so called sophisticated indoctrination of art ‘producers’ who would like to think that they helped in some way. The opposite is true – those that are eccentric are often somewhere else off-radar. Fortunately for The Eccentric City last weekend, we once more found eccentric friends in Dublin – those who appeared with generosity, insight and inspiration, novelty and sub-cultural anarchy. Wonderful and thank you to all concerned!