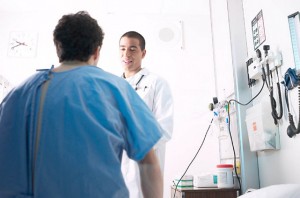 Upon examination, Harry Palmer’s recent discussion with a health care professional regarding his scent related survey to battle swine flu was treated with what was described as ‘open-mindedness’.

I don’t wear perfume. The idea of applying pollutant glue that ‘sticks’ to my skin doesn’t appeal to me. Nonetheless, I do wear some medical non-chalk talc that works well for what it needs to do – preventing body odour and sweat from presenting an unpleasant reaction on skin and in public. Equally, my non-chalk-talc doesn’t present a potential heath hazard as traditional talcs do. Chalk, I believe, once inhaled, sits on the lungs…not good! So why do I whiff like a scented women (or man, I’m unsure) when out and about and not wearing perfume?

Just the other day, I was popping home when I noted that once more a perfume scented fragrance was on my hands, around my coat and spread across my jacket. Unclear exactly how this happened, I reasoned to think that I had been in contact with another person or a series of objects in which scent was transferred. Last night, I used the central library computer service and upon utilising the headset to listen to a friend’s communication, the smell of strong scented perfume was not only present but now lingering around my ears. The smell had attached itself to me once more. Incidentally, and unsurprisingly, the keyboard seemed to have a whiff of the fragrance too.

This is not the first time that I have had the unfortunate scented experience such as this. Without being able to recall the exact times and locations in which scented transfer has happened, I do feel that it is happening more regularly. Perhaps more cosmetic perfume increasingly popular – with male and female users applying the trick of (hopeful) attraction!?

Some interesting questions start to emerge. Is there an increased desire or cooperation between commercial persuasion and user, with the consumer feeling happy to apply what is potentially a highly toxic substance? Such is the sex appeal. But this is not what interests me as an eccentric archaeologist. What I have noticed, is that I am starting to casually map the places where the transfer of (perfume) smell occurs (as well as determining the passive transference of the acquired smell to other parts of my body etc…). The smell has become a kind of new tag and locating transfer signifier, as opposed to the invisibility of coughs and sneezes which spread diseases so effectively…

This leads me onto the current scare concerning Swine flu. One of the difficulties with many airborne / waterborne diseases is the invisibility of bacterium / virus. The carrier, whether showing symptoms or not (animal or human for that matter), unassumingly pass-on transferables that are physically networked causing illness. In being able to improve the monitoring and mapping of people or livestock movement, perhaps the transference of disease can be prevented or lessened. Indeed, Foot and Mouth meant the cordoning off of areas as well as sensitisation of footwear etc… We have learnt to operate systems of curtailment, however far fetched.

Fragrance  might be the key to discovering the patterns of movement and hence the mapping of our interactions with people, places and objects. Could there be a non harmful fragrance that would whiff its way into each of our private and public domains and alert us to their presence, our daily interactions with other, with objects and routes combined? Perhaps this fragrance could be pleasant rather than the strongly scented high street products that are often so powerful that they are unintentionally abject and intrusive? Perhaps the secret of demarking our daily movement, enriched with a ‘public scented odour’ could provide a helpful way of monitoring things touched and things transferred? We could then get a useful survey that demonstrates itself to each of us in which this public smell lingers between us all. Interestingly, this would be a survey in which the participants are aware of themselves in the actual process, having applied the smell personally rather than relying on specialists who operate from a distance. The process could be a cooperative rather than compliant.

Obviously, the idea needs further thought. I am reminded of public swimming pools in which the perfume saturates and intoxicates the water in which we swim. Those that partake in the ‘public scented odour’ survey would have to refrain from such actions in public baths for example.

Any willing volunteers? I’m coordinating the ‘public scented odour’ survey as we speak. Please contact me via BINS.