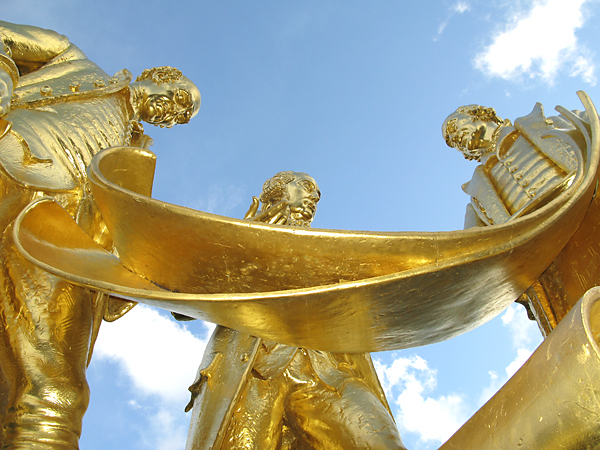 A little peice of Birmingham history for you today!

I’ve passed these statues countless times over the years and had never given much thought to them. To be honest, I don’t often look over to that side of the street very much, the buildings behind the statue aren’t very attractive and the open space outside the Rep theatre always manages to turn my head. However, it was only when I had my camera in hand and ‘seeing’ more than I normally would that the statues finally got my attention. It helped that it was a bright day and the gold was glinting in the sun.

“Outside the House of Sport (formerly the Register Office) on Broad Street stands the statue of Boulton, Watt and Murdoch, nicknamed ‘The Golden Boys’ or ‘The Carpet Salesmen’. It is the work of William Bloye, formerly head of sculpture at Birmingham School of Art and was unveiled in 1956, although preliminary designs were drawn up in 1938.
The larger than life size figures are in bronze, with a gold finish, on a pedestal of Portland stone and are depicted discussing engine plans. The piece is in a “temporary” position and was originally intended to stand outside a Planetarium, which was never built, but which would have stood outside what is now the Repertory Theatre.

The three men pioneered the industrial revolution in late 18th century England. James Watt’s improvements to the steam engine and William Murdoch’s invention of gas lighting have made them famous throughout the world. Matthew Boulton, entrepreneur and industrialist, harnessed their talents in a company that made everything from tableware and copper coinage to steam engines. His home, Soho House, is now a museum. All three men are buried in St Mary’s Church Handsworth, known as ‘the Westminster Abbey of the Industrial Revolution’.”

So now you know! See you next Friday :)