Birmingham might not be shit, but on first glance ‘Virtual Birmingham’ is. Launched today is a special version of Birmingham in Second Life — b-scape (yeuch) (link to it in Second Life, you must have Second Life thing installed and a bloody fast computer). From reports of the launch event (from Simon Gray here and others on twitter) and trying to access it myself I can’t see a coherent argument for Second Life itself, or for a public body to spend time on it. 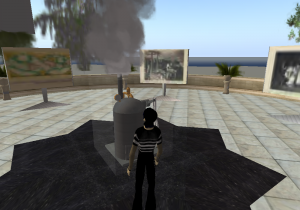 I’d love to see this sort of thing work, I don’t want to join the chorus of boos, I want nothing better than to see Birmingham lead the way in technology. Please someone explain to me why this exercise is worthwhile.

As I see it Second Life itself is an unbelievably clunky way of interacting with anything. It’s too slow and your actions lag behind your controls that much that even if you’ve found something interesting you spend ages overshooting it and turning round to go back. All buildings become obstacles to your movement, you can’t ‘walk’ so you end up pressing the ‘fly’ button and not being able to see anything as it’s all obscured by trees.

The clumsy way you move your avatar around means you’re removed from anything happening to it — and if you’re interacting with something your avatar is in the way of you seeing it. You’ve about as much control over your presence as the kids had in ‘Knightmare‘ (a much more interactive ‘virtual world’).

Frankly Second Life is a tremendous barrier to interacting with anything.

But surely SL has a huge user-base, shouldn’t councils be taking the conversation where the people are? Well, SL was the hot ‘n’ hyped thing a few years back with Linden Labs (SL’s makers) quoting huge million strong user figures. But, anecdotally, most people try SL once or twice and never go back. According to internet community guru Clay Shirky:

“Of those users, the majority — something like 5 out of 6 — bailed in the first month. What we don’t know is what the other sixth are up to, but… we can guess the answer is “Not much.””

A clunky interface isn’t a complete barrier to people using something if it’s good for them, look at how many people manage to use SMSing despite most phones having worse user interfaces than the Ministry of Truth in 1984. What can the Brum in SL provide? There’s a video extolling the virtues of the ‘virtual briefing hub’ (the clever centrepiece):

It’s really using Second Life as a portal to other stuff, website links, photos, videos, augmented Google Maps, and impressive as it might look here I’m afraid I don’t see why you would.

And from the press release that is in the Birmingham Post, Paul Tilsley, Birmingham City Council deputy leader and head of the Digital Birmingham Partnership, said:

“The potential is enormous: visitors could browse the city’s attractions and amenities to see for themselves what it’s like before they visit, residents could access local services, event organisers could use it to showcase exhibitions and displays, and could even host events in the virtual world with performances accessible online.”

Google’s Street View camera car was around in Brum earlier this year, storing up all the panoramic views of the whole of Brum — which will be displayed in a much easier format to get at. That’s where “visitors [will] browse the city’s attractions and amenities to see for themselves what it’s like before they visit”, because it’s easier and because they won’t know about ‘virtual birmingham’ in SL.

← I’m on the phone
Songs about Brum →