As a counterpoint to getting upset and protesting about potential demolition of things in Brum that we like  (not that we’re going quietly over the Library or the Flapper – FB group about to hit 800 people), I thought it would be nice to proffer a few candidates for “regeneration”. Regeneration, in this instance, means “make it look nice or knock the sod down”. No easy jibes here, although the Orion Building and Beetham Tower are really nothing-y — and Selfridges needs a wash (it’s filthy up close, especially the bridge).

Here’s a few ideas of stuff that could be happily replaced with more yuppie flats:

” A big brown stain in the sky” Blockish and uninteresting, and the most scatological colour scheme on our horizon. 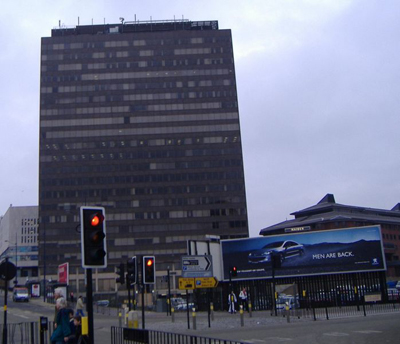 That’s it on the left — the only picture on the internet, and why would anyone take a photo of this supremely boring building. Take the wrecking ball to it and we could see the glory of the Ben Johnston, the fire station, hell even the skateboarding goths.

Another square blob (if such a thing could be said to exist), this, like the Holiday Inn and the Axis tower are just dull and grey.

It looks like it’s about to fall over, and has a hint of Terry Gilliam’s Brazil. Not the friendly face of your local Police Authority.

Uploaded with plasq‘s Skitch!
So, be Clive Dutton for a moment — you can change the city beyond recognition — what would you do?

← You can has free daysaver
Keep ’em peeled →
BiNS was mostly by Jon Bounds.