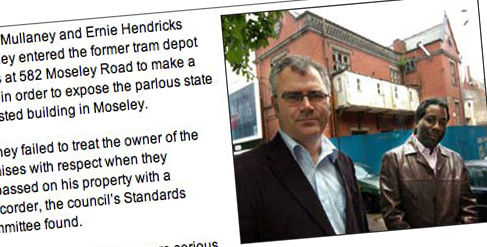 Kings Heath and Moseley councillors Martin Mullaney and Ernie Hendricks went in front of the City Council Standards Committee on Friday – to answer charges of breaking the Local Councillors Code of Conduct when they snuck into the disused Moseley Tram Depot to make a video about the state of the building.

They were found guilty of failing to treat the owner of the property with respect, but cleared of other stuff (full verdict in the Post. And isn’t it nice to see a photo with Ernie in, rather than just Martin). They’ve been asked to apologise and take the video down off YouTube (they have, but everyone should know that once something’s been on the internet…). According to Martin’s site he’s going to say sorry, but Ernie won’t:

Both Councillors to be suspended for one month, unless they write a letter of apology to Mr Zaman and publish the apology on Councillor Mullaney’s website. The suspension will start 14days after the publication of the findings of the Committee next week – the suspension will not occur if the Councillors apologise.

Both Cllr Hendricks and myself have agree the following:

a) I will apologise to Mr Zaman. Cllr Hendricks will not and will be suspended for one month. I will contribute half my Councillors basic allowance to Ernie for that month.

b) It was agreed that I would apologise since Moseley and Kings Heath Ward needs two Councillors, otherwise the Ward Committee can not meet and decisions can not be made.

If you’re going to say sorry and not really mean it (which I think is implied by this statement), why not both say sorry? Can’t really grasp that.

2 comments for “Councillor 2.0 means having to say you’re sorry”