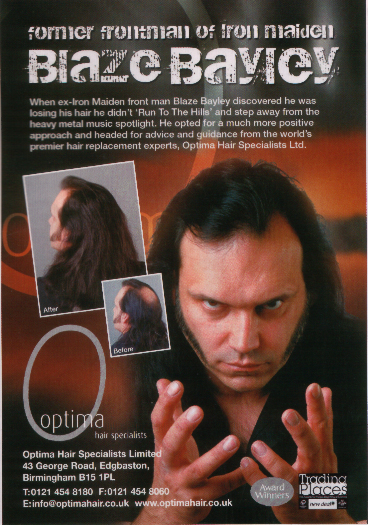 When ex-Iron Maiden frontman (and Brum native) Wolfsbane’s Blaze Bayley discovered he was losing his hair his treatment/syrup/magical formula was so good he bought the company. Or rather appeared in this advert I found at the back of Mojo – you can’t headbang without flowing locks.

Optima’s website has other folically-challenged local clebs on it too – such as ex-Villa and England winger Tony Daley, usually only mentioned on teh interwebs in connection with his “dodgy haircut” on those oh-so-amusing sites that treat football as an extension of Loaded magazine. Tony lost his dreads after a “prank” by his teammates, which is frankly a bit worrying, whereas cricketer Kabir Ali was moved to treatment after being taunted by Vikram Solanki.

So if you’re a professional sportsman with vindictive colleagues, or a heavy metal singer with a part-time job at a “well-known UK car accessories retailer” (wikipedia, so erm..) with hair-loss problems you may want to weave (sorry) a path to Edgbaston.

← Birmingham Bloggers meeting 2 – This post is a gestalt entity – copied and pasted from various sources
Drift to The Junction →
BiNS was mostly by Jon Bounds.