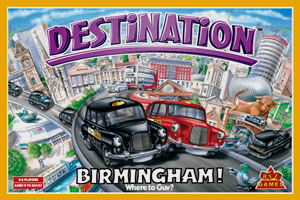 Destination is a board game based on the idea of being competing black cab drivers around a city. The first , the London version, was pooh-poohed on the first series of Dragons Den – but it’s obviously done well enough to expand as along with Dublin, New York, Paris and erm Norwich comes Destination Birmingham! (their exclamation point).

The makers have done a good job on the box – see Brasso, a TWM bus and I’m assuming that the bizare and dangerous looking flyover was always based on the Queensway. Inside – as for destinations that people may want a taxi to it’s not quite as well done:
Minories Shopping Centre? Caxtongate? not to mention that it’s nigh on impossible to get a taxi anywhere near most of the city centre attractions.

They should have cast the net a little wider, part of the game could of been how to make excuses that you can’t drive over to Great Barr at this time of night, extra points for stifling heat and magic tree air freshener.

I think I’ll hold off for Perry Barr Cars the boardgame – the only taxi firm to ever send me a Christmas card.

← Hughes in Pictures
Don’t Close Me Down →
BiNS was mostly by Jon Bounds.