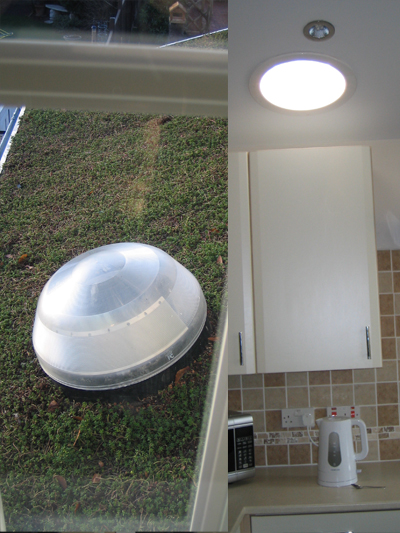 After reading in the Birmingham News about the Bournville ‘Eco House‘, I decided to take a trip there this avo to see it for myself. The house, built in 1929 and owned by Bournville Village Trust, has been refurbished and now contains over 50 eco-friendly features. It’s one of the very first homes of its age to receive the Government’s Eco Homes Excellent accreditation.

The house (at 264 Selly Oak Road) was officially opened by none other than David Bellamy and remains open to the public until the 14th (Friday) from 2pm until 7pm. Then the lucky tenants move in.

I decided I wanted to go and see it in daylight because, as a SAD sufferer, I was particularly interested in seeing the sun tubes (see photo), which bring natural sunlight from the roof right into the house. These didn’t disappoint. The house had three of them and all were really bright. No idea how much those things cost but will definitely look into it further.

The house also had a ‘bore hole’ in the front garden which, according to the bloke that showed me round, went down 65m – mind boggling! The geothermal energy is used to heat the radiators and underfloor heating.

The thing that struck me was that it was all very clean and modern. I think I expected it to be a bit more ‘hippy’ hehe, but you wouldn’t know that most of the eco technology was there, it just works efficiently in the background.