We told you that the UCE was about to change its name, and we were right. As of this morning it’s now called “Birmingham City University”. New names, new branding, and they’ve (quite rightly to go with the name) gone blue: 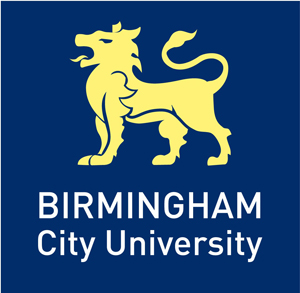 Seems to be a consciously ‘old’ design, as if they were trying to create a bit of heritage – which is pretty unnecessary as those that actually think about these things will know all about all the good things the Uni has been doing over the years.

Also in the press release (yes BiNS gets press releases, we’re like the establishment or something – honestly, send them over but no promises) was more confirmation that City University plan to colonise much of Eastside with its creative arts faculties. It also reminded me that pre-Uni it was actually Birmingham Polytechnic and not Perry Barr Polly – before that it was City of Birmingham Polytechnic, so there is some history in the name.

I assume that most of the Perry Barr Campus is to stay where it is, unless it burns down due to electrical faults I caused when working for the electrician that rewired bits of it in the late nineties.
There’s been a discussion about the new name over at CiB, where most of the poor jokes (some pinched from our previous post) have been done, it’s also where I wonder exactly what the name change will do to the university’s google rankings. It’s also where everyone has so far refrained from wondering aloud that the new logo looks “like a dog eating a pringle” ;).

I’m guessing the new website will be bcu.ac.uk, so you can take a closer look at the new branding.