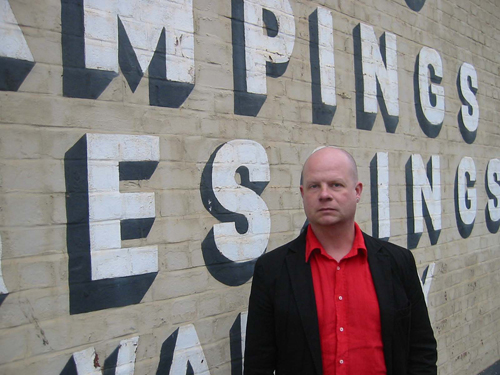 As part of the Plus International Design Festival, Central Library font geek extraordinare and local history expert Ben Waddington will be running a series of design walks around the city centre focusing on different aspects of type and fontage.

One is his tour of places related to John Baskerville, which I went on in March, and is fascinating for those interested in either local history or font design. Unfortunately much of Baskerville’s Brum exists only in the past, but that doesn’t stop Ben painting a vivid picture. Another is a Type Tour of Digbeth, highlighting the varied letter forms in the side streets, Birmingham’s industrial heritage and to demonstrate that a walk through the humblest back street can yield fascinating examples of type forms.

The third tour is a city centre type tour and will continue to run after the festival and we’re promised Ben will use letterforms to pull out stories of the buildings and the history of Birmingham.

Should be brilliant, and apparently Ben also has a tour called “The Hidden Pubs of Digbeth” so he might even take you for a pint afterwards.

*This is a fantastic type pun, and anyone who doesn’t enjoy it is a right bastard type (there we go again).

3 comments for “Where’s all this leading*?”